The following contains spoilers from The Flash‘s Season 8 premiere.

The Flash returned for Season 8 this Tuesday night, and the titular speedster is as fleet on his feet as ever. But can even a “leveled-up” Barry handle the news that he is destined to cause no less than Armageddon?

But let’s not harsh everyone’s mellow just yet. Much of the season opener aka Part 1 of the five-part “Armageddon” event was light-n-bright, demonstrating how extra- powerful Barry is after the events of the Season 7 finale. Iris, similarly, is now her very best self, lording over a growing Central City Citizen Media that employs actual non-friends writers and has a podcast and everything!

Barry and Iris continue to be on the baby-making track, though their latest liaison is cut short by the arrival of Ray Palmer, in town for a tech convention but unable to book a hotel room. Crashing at the West-Allen’s, Ray the next morning meets a fan-boying Chester, who has arranged to be the former tech titan’s handler for the Con. But when Chester arranges a pitch-fest with some bright young minds, Ray reveals that he isn’t looking to start up another start-up; he wants to just enjoy life and his wife.

The Villain of the Week is one of the series’ first — the Royal Flush Gang, who similarly have “leveled up” and are looking to rob a whole buncha cryptocurrency. The Flash, though, is able to easily stop them in their tracks, seeing as he can now think faster than Queen can read his mind.

At the tech convention, Iris interviews legacy honoree Ray, who takes a cue from Chester and says that his future is perhaps TBD; for the time being, though, he later pitches a foundation for bright young scientific minds, in Chester’s dad’s name. Just as Ray and Iris wrap their Q&A, an alien materializes on the stage. After slugging it out with Barry a bit and leading their fight to the sidewalk below, this Despero declares his mission to kill The Flash, and thus prevent the speedster from destroying the world in 2031. Barry dismisses the forecast as so much poppycock, while Ray as The Atom buys them some time by hacking Despero’s transporter belt gizmo to teleport him… somewhere.

Regrouping at STAR Labs, it is decided that Barry simply needs to show Despero what a righteous dude he is. Luring Despero to STAR Labs, The Flash invites the alien to probe his mind, where no duplicity or anything are detected. Still, Despero can’t run the risk of missing out on his chance to stop Armageddon. But when The Flash reveals his true identity to the alien, a moved Despero agrees to give him seven days to prove his case and not give any indication he might one day turn bad.

Assessing Barry’s mindset coming out of Part 1, Flash star Grant Gustin told TVLine, “He of course thinks there’s no way that this is possible. There’s nothing that would make Barry turn on the world that he has vowed to protect. And because he and the whole have leveled up, he feels very confident — initially — that this is not going to be a problem”

The operative word being initially…. 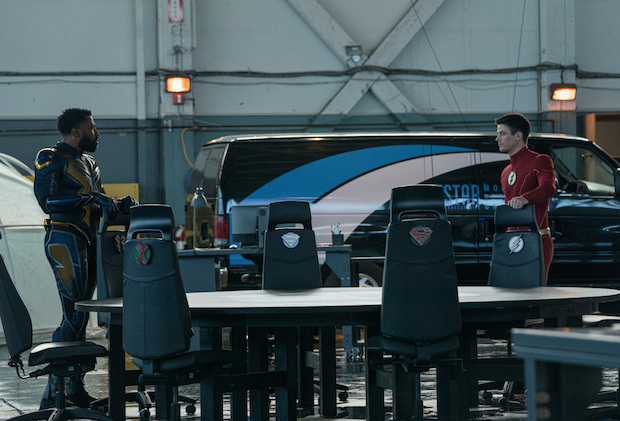 Looking ahead to Part 2 airing next Tuesday, Gustin previews, ‘There’s a turn, and that is why Barry goes to the Hall of Justice and seeks out Jefferson [Pierce]” aka Black Lightning, played by Arrowverse alum Cress Williams. “He needs help with something that I won’t spoil, because it’s a big twist that kind of sets the rest of the five-parter into motion.

“But by the end of the second episode,” Gustin teases, “there is a development that makes Barry think that maybe [The Flash causing Armageddon] is possible.”

Elsewhere in the Season 8 premiere: Caitlin, inspired by Frost’s romantic side, decides she herself is ready to start dating again… Kristin Kramer, who realized her own “mimic” ability at the end of Season 7, has disbanded the metahuman task force, and now supervises Barry at the CCPD… and Iris gave Allegra a (frankly undeserved?) promotion, which at first (and understandably?) irked three of her more-experienced (and snotty) colleagues.

What did you think of the “Armageddon” 5-parter kickoff?