“We want to be the watering hole for the people in midtown; their go-to place,” Aaron Pool says. “We call it an ‘elevated beer bar.’”

“With Wren House, he knows the beer industry so well,” Aaron says. “This is an opportunity for him to get real creative. He’s sourcing kegs from around the world of different styles.”

Another partner, Mike Swofford, developed the wine list. Bottles of wine and canned beer are available to drink on-site or to go, along with floral bouquets in a nod to the original Green Woodpecker, a flower and gift shop that existed in the space from 1974 to 2007. Eventually, Aaron says, they’d like to sell salsas and other merchandise.

Linda Pool’s creative cakes and possibly pies will sit in a case in the middle of the bar to tempt patrons. Tacos are available to snack on at the Green Woodpecker.

Besides sweets, the Green Woodpecker serves complimentary house-made chips and salsa to snack on, along with just two types of tacos served on hand-pressed yellow corn tortillas. Customers will be able to choose between al pastor carved fresh from a rotating spit called a trompo and maitake, also known as hen-of-the-woods mushrooms.

“People will be able to order Poolboy tacos through Woodpecker, and it’ll get delivered over to their table,” Aaron says, adding that customers can bring in outside food as well. The modern interior of the Green Woodpecker.

The indoor and outdoor space seats 100 between the 3,000-square-foot patio and 1,500-square-foot interior. Inside, the bar features U-shaped booths and communal tables, and one side will have a pink wall that’s “light, bright, really fun, casual,” Aaron says. Acclaimed San Francisco artist Jeremy Fish — a former patient of Jared’s from his days as a dentist — was tapped up to create a mural.

Otherwise, the color scheme is dark green and deep burgundy for a “regal” vibe, Aaron says, which recalls the animal the bar is named after. Following in the footsteps of Drew’s avian-named Wren House, the guys are in talks to establish a partnership to support bird-related causes. Flowers are available at the Green Woodpecker, a nod to its former concept.

The Green Woodpecker offers something for everyone, Aaron notes.

He came up with the idea because he’s lived in the area for nearly a decade and is “passionate about midtown” and what’s being done to bring back Park Central. A former neighbor was a partner at Holualoa Companies, a real estate investment firm that’s helping to revitalize the midcentury-modern marvel and the two got talking.

“I really believe in midtown,” Aaron says. “I live in midtown, and I think there’s still a need for cool places.”

The open-air Park Central Mall opened in 1957 as the first shopping mall in Phoenix and was a bustling retail center. However, it lost its luster when fully enclosed malls became popular, and it was converted into mostly office space. Holualoa has been playing up its desirable midcentury modern design and markets the complex on its website as “a space that is innovative, high-tech, and creative.”

Along with bringing new concepts to Park Central, the Pools also aim to preserve its history by retaining the name of the business that was there for so long and holds memories for many. The owner of the original Green Woodpecker, Charlie Sands, says, “I look upon it as a compliment.” 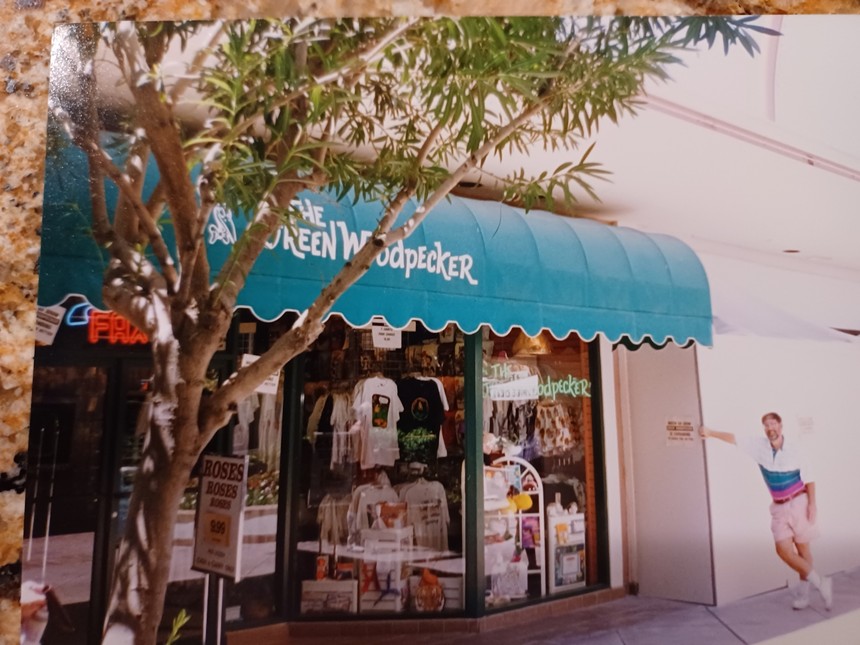 The owner of the original Green Woodpecker flower and gift shop, Charlie Sands, stands outside the shop.

Sands says his business began as a 300-square-foot “plant bar” and grew to 10,000 feet. Half of that served as a store and the other half was a floral arrangement manufacturing area that supplied 18 hospital gift shops around the Valley. At the height of the business, he had 10 trucks doing daily deliveries and 50 on holidays, with one Valentine’s Day seeing 2,300 orders fulfilled.

Sands also is responsible for saving the 20-foot statue called “The Sun Worshipper” that a previous owner of Park Central was planning to scrap. He hired a crane to haul away the 2,000-pound metal artwork and deposit it in his backyard, where it overlooked his pool for 20 years until he moved and placed it in his front yard.

Although Sands claims the statue brought him good luck, he knew he couldn’t keep it when he and his wife bought a home in the Biltmore, so he offered to loan it back to Park Central. Now located on the Third Avenue side of the plaza, the statue’s hands stretch toward the windows of St. Joseph’s Hospital.

“It turned out to be a great thing, because being a good luck symbol, patients can look out their window and see this,” Sands says.

And now, people visiting the hospital will be able to pop in and get a bouquet just like they used to as well.

“We feel that would be kind of a fun way to bring people into the bar,” Aaron says.

Initial hours for the Green Woodpecker will be noon to 10 p.m. daily until the grand opening celebration, scheduled for the week of December 19.

Two Russians make it to Alaska in a small boat. President Putin at the Kremlin, September 30, 2022. Grigory Sysoyev,{...}

We love practical gifts — after all, we spend a lot of time thinking about what makes the perfect example{...} View the original article about A Comparison Between Cannabidiol Tincture And CBD Oil at How To Buy CBD Oils. Cannabidiol{...}