PLOT: Knowing that his former love Gellert Grindelwald (Mads Mikkelsen), is looking to take control of the Wizarding World and declare war on the Muggles, Albus Dumbledore (Jude Law) enlists the aid of Newt Scamander (Eddie Redmayne) and his Fantastic Beasts to put a stop to him once and for all.

REVIEW: There’s a lesson to be learned here. Look at how much has gone wrong with Warner Bros’s seemingly cursed extension of the Harry Potter franchise, Fantastic Beasts. It perfectly illustrates the danger of milking a franchise for its worthwhile not delivering what audiences want to see. There’s room for more of J.K Rowling’s Wizarding World, but the latest and presumably final Fantastic Beasts movie is proof positive that if Daniel Radcliffe’s Harry Potter isn’t involved, no one cares. The films have never really worked, as this third instalment feels like a desperate attempt to bring the series to a premature end while still tying up loose ends for the fans who remain devoted to the franchise.

If you watched and were a fan of the last two movies, you’ll notice some frustrating “course corrections” here. For one, Katherine Waterston’s Tina is almost entirely absent save for a tiny cameo. She’s been written out of the series for some reason, despite being one of the most compelling of the new characters. Her absence is felt in many ways, notably in how it also takes the focus off Eddie Redmayne’s Newt Scamander, as his relationship with her dominated the last two movies. Here, he becomes little more than a supporting character in a Wizarding World that seems to be losing a lot of its magic.

The other significant change in Fantastic Beasts: The Secrets of Dumbledore is that Johnny Depp no longer plays the antagonist, Gellert Grindelwald. While the sacking of Depp seemed like a bit of a cowardly, knee-jerk reaction, what’s even stranger is how the character has been changed, with them ditching the striking look Depp brought to the character (including his scary eye, pale skin and blonde hair) and just letting Mads Mikkelsen look like – well – Mads Mikkelsen. It feels like he’s playing an entirely new character, which ruins the continuity of the two films, especially given that Grindelwald and Dumbledore were supposed to have been in love at some point. He feels like a generic bad guy here, which is perhaps why the focus has shifted largely to Ezra Miller’s Creedence, who’s given the lion’s share of screen time here. Given recent headlines, one might reasonably think sacking Depp and emphasizing Miller was a choice that didn’t pay off, but I digress.

One big issue with the latest Fantastic Beasts is how the Wizarding World seems utterly drained of all of its charms. The tone is bizarre here. The Fantastic Beasts movies always seemed like they were made for the now grown-up fans who grew up with the Potter books, but WB is trying to have it both ways by embracing mature themes and peppering the film with magical creatures they can make into toys. The last Fantastic Beasts had some memorably dark moments, but this one gets off to a sour start, with the brutal killing of a magical baby creature and its mother, who weeps as she dies. What is this? Plague Dogs? One must question the wisdom of starting the film on such a downer and a scene that will likely send kids running for the exit with tears in their eyes.

I also have to take issue with Jude Law’s performance as Dumbledore. I love Law, but his sophisticated, low-key version of the character feels nothing like the impish wizard we saw played by Richard Harris and Michael Gambon in the Harry Potter films. He seems too serious and cerebral – which is a word I don’t think should ever be associated with the Harry Potter universe.

However, the movie does have a few saving graces. Oddly, Dan Fogler’s Jacob, who I never cared for before, became my favorite character by far, with him having the only agency as he’s trying to rescue his beloved Queenie from Grindelwald. Similarly, Alison Sudol gives the movie some genuine pathos. You invest in their relationship. I also really liked Jessica Williams as Professor Lally Hicks, the wizard who seems to be filling in for Waterston’s Tina. Her performance is charming. She looks like the only one in the cast who’s having any fun, which is bizarre as this series is supposed to be all about fun. James Newton Howard also contributes a fine score, and I’m glad he was retained, even though the movie feels decidedly non-epic, lacking any significant action sequences. There’s just loads of talk, talk, talk – again – bizarre for a film set in the Wizarding World.

As it is, Fantastic Beasts: The Secrets of Dumbledore feels like a compromised end to a franchise extension that’s never really worked as well as everyone hoped. There’s a glimmer of hope the series could continue left at the end, but I doubt even the most devoted J.K. Rowling fan will want it to. If they’re going to continue making movies in the Harry Potter universe – you need Harry Potter. It’s as simple as that. 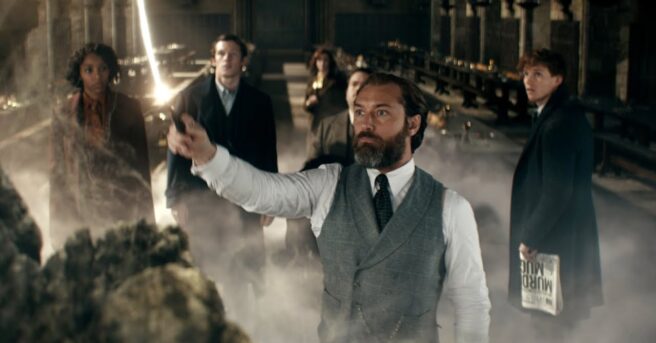