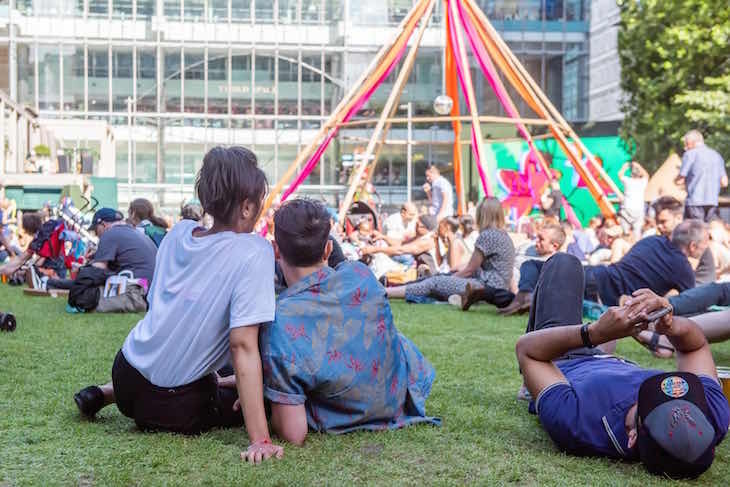 GREEN CITY: Guildhall Yard is the first venue to host London Metropolitan Archives’ roaming exhibition, Green City, a collection of photographs and prints which celebrate London’s green spaces. Look out for the exhibition at Aldgate Square, Hampstead Heath and Epping Forest later in the summer. 18-31 July

ISLINGTON FESTIVAL: Islington Festival of Music and Art continues this week, with concerts at venues including Christ Church Highbury and Little Angel Theatre, as well as a live drawing class. Until 24 July

FLOATING FILM FESTIVAL: House of Gucci, Pretty Woman, West Side Story and Moana are among the films on the programme at the second (and final) week of St Katharine Docks Floating Film Festival. Settle down on a deckchair or sofa on the floating pontoon and watch the films on the big screen. Until 24 July

WOVEN WONDERS: Been down to King’s Cross recently? If not, you won’t have seen Woven Wonders, a colourful, outdoor installation taking over Coal Drops Yard. Sheila Hicks’ installation uses distinct colours and natural materials to transform the area. Until 16 October

SUMMER HOLIDAYS: With some schools wrapping up for the summer this week, you’ll be needing our guide to things to do in London in the summer holidays. We’ve compiled plenty of family-friendly suggestions, from exhibitions to theatre shows to day trips — and several free things to do too.

JAZZ: Early jazz and swing, ragtime, French musette and Brazilian choro are all in the remit of pianist and vocalist Joplin Parnell, playing tonight at the Voodoo Lounge at Ronnie Scott’s. 7pm

SISTER ACT: Beverley Knight and Jennifer Saunders are among the impressive cast of the new musical Sister Act, launching at the Eventim Apollo. Sadly, since the production was delayed by Covid, Whoopi Goldberg herself is no longer scheduled to appear, but we’re still promised a feel-good show about a witness to a murder who hides from society by entering a convent and becoming a nun. From 19 July

DOGGETT’S COAT AND BADGE: Yes, it’s the name of a pub, but the Doggett’s Coat & Badge is also an annual boat race taking place on the Thames between London Bridge and Chelsea. It’s been going for over 300 years, with up to six young watermen participating each time — here’s the course, so you can pick a viewing point. 2.30pm

BOOK LAUNCH: The Africa Centre — which recently unveiled its shiny new home — teams up with White Cube for the launch of new book, Tunji Adeniyi-Jones, about the figurative painter of the same name. Hear from the book’s author, and curator, Dr Jareh Das at this launch event at White Cube. 6pm-9pm

SEARCH FOR DIPPY: Head to Natural History Museum for an interactive mystery night. The year is 1905 and you’re attending a special preview of the newest display, Dippy the Diplodocus. When a note is found warning that several parts of Dippy will be stolen before the display is unveiled, you must follow clues around the museum to solve the mystery. Age 13+. 6.45pm-10.30pm

FINGERPRINT SCIENCE: It’s commonly known that fingerprints are used by the Police in collecting forensic evidence. In this talk at the Royal Institution, find out how exactly this works, and how forensic scientists are upping their games as criminals become more careful to avoid leaving forensic evidence at crime scenes. 7pm-8.30pm

FUTURE OF AGEING: A hands-free cargo-carrying robot, and a a self-balancing, two-wheeled personal electric vehicle are among the objects on display at The Future of Ageing, a new Design Museum exhibition which confronts the fact that by 2040, more than a quarter of the UK’s population will be aged over 60, and looks at what can be done to help them. 20 July-11 September

NATURE TALKS: Parents or carers with a baby under a year old are welcome at Natural History Museum’s Bring Your Own Baby: Nature Talks. It’s a relaxed event, where noise and moving around to care for your baby is perfectly acceptable, as experts talk about science on the high seas and ocean exploration. 2pm

SOUTHWARK CATHEDRAL: Two Southwark Cathedral expert tour guides host an illustrated online talk about the monuments and memorials of the building. Find out about some of the poets, playwrights, Jacobean bishops and local parishioners who have memorials at the cathedral, as well as how the building was saved from demolition. 6.30pm-7.30pm

LAUGH TRAIN: It’s that time of the week when comedians descend on the Four Thieves in Battersea for the Laugh Train Home showcase. Dave Chawner MCs the evening, with other slots including Esther Manito, as seen on Live at the Apollo. 8.30pm-10.30pm

LOUISE PENTLAND: Bestselling author and YouTube Louise Pentland is at Waterstones Piccadilly to celebrate the launch of her new book, Time After Time. She chats to another author, Michelle Elman about the book, which is the story of a woman who is given the chance to reinvent herself in another time. 6.30pm

VINTAGE FAIR: Head down to Wilton’s Music Hall after work for a Pop Up Vintage Fair, giving you a chance to browse and buy vintage fashion, jewellery and accessories. There’s also live performances of vintage jazz and blues music, and a cocktail bar. 4.30pm-9.30pm

HYPER JAPAN FESTIVAL: Love all things Japanese? Get yourself to Hyper Japan, a celebration of Japanese culture. Live performances, a market, food and drink stalls and a sake experience are all part of the fun at Evolution London in Battersea Park. 22-24 July

BUCKINGHAM PALACE: If all the Platinum Jubilee hullaballoo has piqued your interest in Buckingham Palace, take the opportunity to go inside at the annual summer opening of the State Rooms. The Throne Room, Ballroom Grand Staircase and Palace Gardens are among the areas open to the public for just a few weeks — we’ve been inside before and it is spectacular. 22 July-2 October

ISLANDER FESTIVAL: The Islander Festival Summer Fete is at London City Island, located on a peninsula just north of Trinity Buoy Wharf. The event takes the form of a traditional fete, with face painting, lawn games, live music, races for kids, a barbecue and more. 11am-6pm

LAGER FESTIVAL: It’s the final day of Five Points’ Lager Festival (started on Thursday 21 July) — and it looks like it’s going to be the weather for it! Expect 12 different lagers on tap, from unfiltered Pilsners and aromatic Kolschs to dry-hopped Helles. 12pm-11pm

NON-LEAGUE WITH A DIFFERENCE: Ever heard of the Egri Erbstein tournament? This non-league football tournament celebrates the life of a Hungarian Holocaust survivor who became a pioneering football coach before perishing with his Torino team in an air disaster. This year’s edition takes place at Corinthian-Casuals in Tolworth and also features Hilltop (a team that draws many of its representatives and supporters from the London Somali community), Sheffield FC (the world’s oldest football club) and Budapesti AK (Egri Erbstein’s first team who are travelling from Hungary). Sat-Sun, 12pm onwards

KALEIDOSCOPE: Happy Mondays, the Craig Charles Funk & Soul Show and comedians Dom Joly and Ed Byrne are all on the eclectic line-up at Kaleidoscope Festival. The one-day event takes over Alexandra Palace with live music, DJ sets, comedy and spoken word performances, and magicians, games and workshops for families — all with incredible views over London. 1pm-10.30pm

NOCTURNAL CREATURES: As part of this year’s Sculpture in the City, Whitechapel Gallery puts on Nocturnal Creatures, an evening of live performances, workshops and sound installations dotted around the City area. The website has a suggested route and schedule for the evening, or you can wander at your own pace and see what you stumble across. 6pm-11pm

ICE SUNDAY: Once a year, the little-known London Canal Museum in King’s Cross invites the public down into its Victorian ice well. Descend by ladder into the underground space where ice used to be stored, and take part in all manner of ice-themed activities back above ground. 10am-4.30pm

VALENTINES MANSION: The picturesque Valentines Mansion & Gardens in Ilford is open every Sunday (and Monday), and has just launched a new free exhibition, in which its studio artists have created paintings, ceramics, fused glass and basketry to celebrate the Queen’s Jubilee. 10.30am-4pm

BLACK REPRESENTATION: From African Kings and Queens, to servants and slaves — hundreds of Black people are represented in the National Gallery, in many different ways. This guided tour from Black History Walks explores some of the most interesting. 11am

FAMILY RAVE: Big Fish Little Fish hold one of their famous family raves at Horniman Museum, as part of Lewisham’s Beyond Borders programme. Take the whole family along to rave the afternoon away, with live DJs, bubbles, balloons, craft activities, storytelling, and plenty more to keep all ages entertained. 2pm-6pm

Urban oddity of the week

If you’re heading to the beautiful Valentines Mansion for the new exhibition (see Sunday) be sure to explore the wider park for several top-draw oddities. First among them must be this peculiar river-side alcove, seemingly hewn into the wall of the enclosed garden. It’s over 250 years old. Look out too for a grotto, Jacob’s well, and a distinctive clock tower. The park was also the scene of London’s worst lightning tragedy, when seven people were killed by a single strike in 1939. As far as we know, there is no memorial.

Good cause of the week

“Wellness warrior” Sarah Hunt hosts charity yoga classes on Sunday mornings at London Dock, in Wapping, for Londoners to rewind, relax, and reset. All proceeds of the £10 classes go to Honeypot Children’s Charity. Since 1996 Honeypot has been working to enhance the lives of young carers aged 5-12 years by providing respite breaks and on-going outreach support. In the UK nationwide, the charity is dedicated to providing young carers with a break from demanding and stressful responsibilities at home and provide a safe, nurturing environment where children at risk can develop their full potential. The classes are provided in association with the Berkeley Foundation, and can be booked here.

You’re propped up at the bar, drink in hand, life is good – but what’s that? An unsolicited tummy rumble?{...}

Wildlife campaigners have said it is “ludicrous” that police have to ask the Queen’s permission before they can enter her{...} 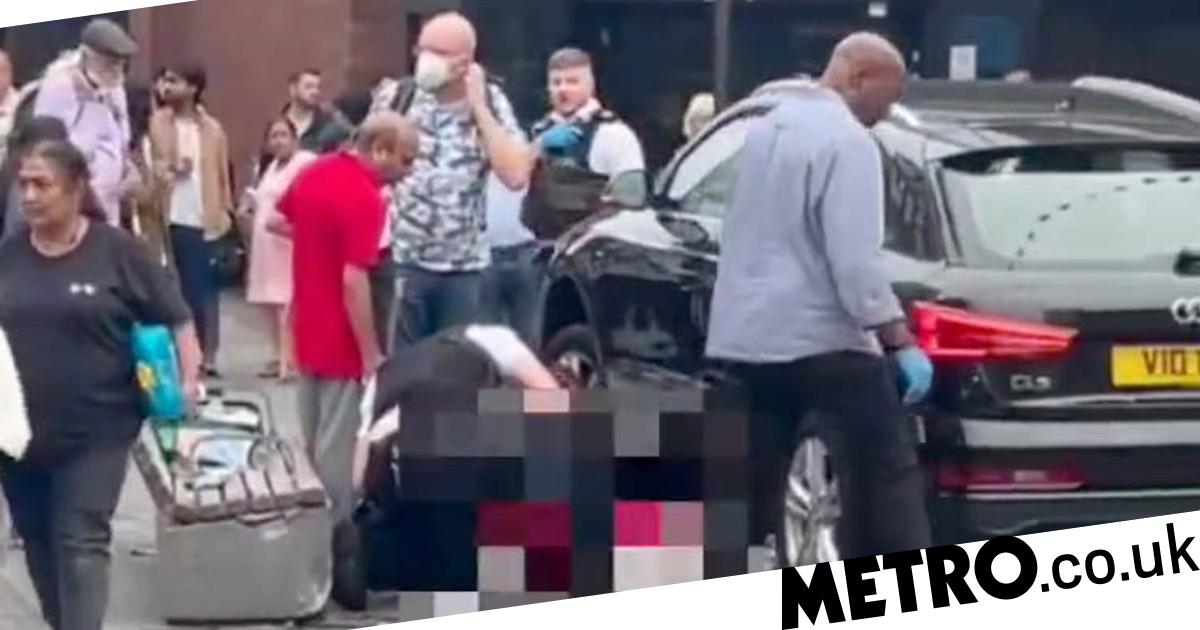 The scene in Harrow this evening (Picture: UKNIP) Five people have been injured after a car mounted the pavement and{...}