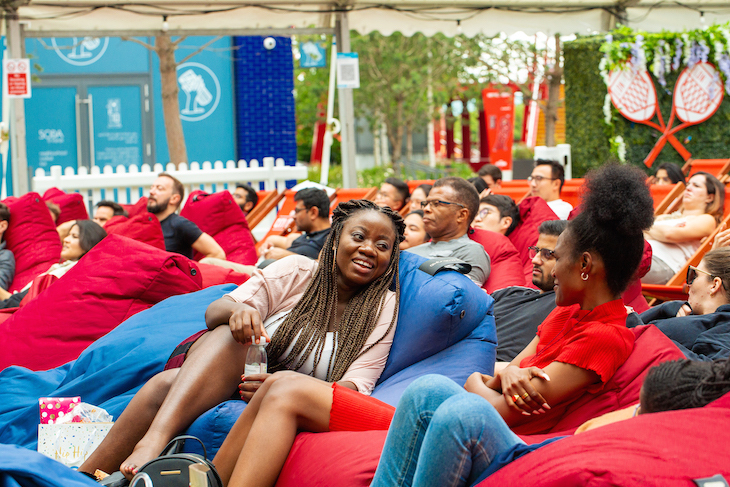 Things to do this weekend is sponsored by We Are Lewisham.

FULHAM CINEMA: London’s outdoor cinema season continues apace, and this weekend, Pop Up Screens take over Bishop’s Park in Fulham for screenings of The Breakfast Club, The Greatest Showman and Grease. It’s the first of several London locations this year, including Hammersmith, Greenwich and Holborn. See the website for all venues. 22-24 July

HYPER JAPAN FESTIVAL: Love all things Japanese? Get yourself to Hyper Japan, a celebration of Japanese culture. Live performances, a market, food and drink stalls and a sake experience are all part of the fun at Evolution London in Battersea Park. 22-24 July

BUCKINGHAM PALACE: If all the Platinum Jubilee hullaballoo has piqued your interest in Buckingham Palace, take the opportunity to go inside at the annual summer opening of the State Rooms. The Throne Room, Ballroom Grand Staircase and Palace Gardens are among the areas open to the public for just a few weeks — we’ve been inside before and it is spectacular. 22 July-2 October

SUMMER GLAMPING SHOWCASE: The great outdoors and good vibes combine at the free Summer Glamping Showcase. Held in the leafy Meadow at Dulwich Picture Gallery, pitch up to ogle luxury tents, chomp on wood-fired pizza, win at the raffle or seek out the photobooth inside a VW camper van! There are also discounts to inspire your next adventure. 23-24 July (sponsor)

GREEN CITY: Guildhall Yard is the first venue to host London Metropolitan Archives’ roaming exhibition, Green City, a collection of photographs and prints celebrating London’s green spaces. Look out for the exhibition at Aldgate Square, Hampstead Heath and Epping Forest later in the summer. Until 31 July

ISLINGTON FESTIVAL: It’s the final weekend of Islington Festival of Music and Art, which finishes up with a series of concerts at various venues, as well as a live drawing class. Until 24 July

FLOATING FILM FESTIVAL: The final four screenings of this year’s St Katharine Docks Floating Film Festival take place this weekend — choose between Boss Baby 2, West Side Story, Moana and Belfast. Settle down on a deckchair or sofa on the floating pontoon and watch the movie on the big screen. Until 24 July

FUTURE OF AGEING: A hands-free cargo-carrying robot, and a a self-balancing, two-wheeled personal electric vehicle are among the objects on display at The Future of Ageing, a new Design Museum exhibition which confronts the fact that by 2040, more than a quarter of the UK’s population will be aged over 60 — and looks at what can be done to help an ageing population. Until 11 September

WOVEN WONDERS: Been down to King’s Cross recently? If not, you won’t have seen Woven Wonders, a colourful, outdoor installation taking over Coal Drops Yard. Sheila Hicks’ installation uses distinct colours and natural materials to transform the area. Until 16 October

SUMMER HOLIDAYS: With some schools wrapping up for the summer this week, you’ll be needing our guide to things to do in London in the summer holidays. We’ve compiled plenty of family-friendly suggestions, from exhibitions to theatre shows to day trips — and several free things to do too.

Lewisham is the place to be this weekend, as a free three-day creative festival of works by D/deaf, disabled and neurodiverse artists takes place.

Music, dance, theatre, visual arts and more are all part of Liberty Festival, which is presented by the Mayor of London as part of London Borough of Culture 2022.

Artist Yinka Shonibare CBE, Jess Thom of Touretteshero, poet Raymond Antrobus and performance artist Selina Thompson are some of the big names on the schedule, along with community groups and organisations. All events are completely relaxed, so audience members can move around, leave and re-enter as they like.

Liberty Festival takes place 22-24 July at various locations. Events are free, and open to all ages — stay for the whole day, or simply drop in to one or two events. Full programme available online.

ISLANDER FESTIVAL: The Islander Festival Summer Fete is at London City Island, located on a peninsula just north of Trinity Buoy Wharf. The event takes the form of a traditional fete, with face painting, lawn games, live music, races for kids, and a barbecue. 11am-6pm

KALEIDOSCOPE: Happy Mondays, the Craig Charles Funk & Soul Show and comedians Dom Joly and Ed Byrne are all on the eclectic line-up at Kaleidoscope Festival, along with Charlotte Church and House Gospel Choir. The one-day event takes over Alexandra Palace with live music, DJ sets, comedy and spoken word performances, and magicians, games and workshops for families — all with incredible views over London. 1pm-10.30pm

DICKENS AND TRAVEL: Lucinda Dickens Hawksley, author and descendant of Charles Dickens, gives a talk about her new book, Dickens and Travel. Head to the Charles Dickens Museum to hear her discuss the famous author’s time spent in Italy, Switzerland, Paris and Boulogne — as well as signing copies of the book. 2pm/4pm

NOCTURNAL CREATURES: As part of this year’s Sculpture in the City, Whitechapel Gallery puts on Nocturnal Creatures, an evening of live performances, workshops and sound installations dotted around the City area. The website has a suggested route and schedule for the evening, or you can wander at your own pace and see what you stumble across. 6pm-11pm

ICE SUNDAY: Once a year, the little-known London Canal Museum in King’s Cross invites the public down into its Victorian ice well. Descend by ladder into the underground space where ice used to be stored, and take part in all manner of ice-themed activities back above ground. 10am-4.30pm

VALENTINES MANSION: The picturesque Valentines Mansion & Gardens in Ilford is open every Sunday (and Monday), and has just launched a new free exhibition, in which its studio artists have created paintings, ceramics, fused glass and basketry to celebrate the Queen’s Jubilee. 10.30am-4pm

BLACK REPRESENTATION: From African Kings and Queens, to servants and slaves — hundreds of Black people are represented in the National Gallery, in many different ways. This guided tour from Black History Walks explores some of the most interesting. 11am

FAMILY RAVE: Big Fish Little Fish hold one of their famous family raves at Horniman Museum, as part of Lewisham’s Beyond Borders programme. Take the whole family along to rave the afternoon away, with live DJs, bubbles, balloons, craft activities, storytelling, and plenty more to keep all ages entertained. 2pm-6pm

THE WRECKERS: This year’s BBC Proms are well and truly under way. Finish off your weekend with Prom 13, Ethel Smyth’s The Wreckers: an opera of love and tragedy in a community lashed by the sea — presented by Glyndebourne Festival Opera. 6.30pm

A man who stabbed a sixteen-year-old boy with a machete during a ‘frenzied attack’ in Rochdale has been jailed for{...}

The reputation of British politicians is at a “low point”, the UK’s new independent parliamentary commissioner for standards has said,{...}

For judoka Emily Betts, it would be a dream come true to compete at a home multi-sport Games – and{...}