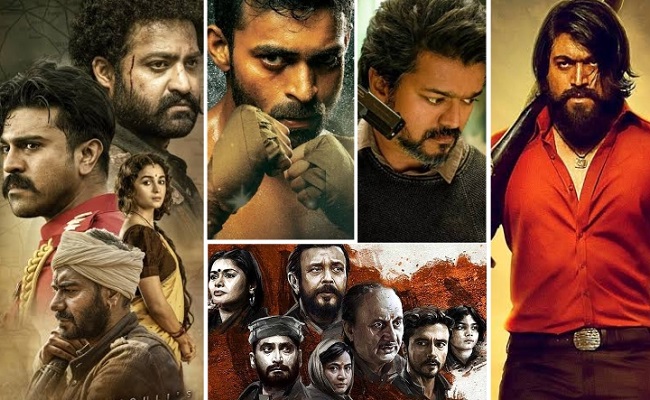 1. KGF 2: This pan Indian film from Sandalwood has been shaking the Bollywood box office with its Hindi version.

This is the biggest Hindi film in the history of Bollywood as of now collecting almost close to Rs 190 Cr in the first four days of its release.

Starring Yash in the lead role, the film did hold the interest of mass and young audience who happen to be the patrons of this film watching multiple times.

The collections in regional languages are also very good and it is heading towards becoming the highest grosser of this year so far. Prashant Neel is the director of this film.

The theatrical run of this film slowed down phenomenally but so far did a wonderful feat throughout the nation.

Directed by Rajamouli with Ram Charan and NTR in lead roles, this film was expected to do something bigger than that of Bahubali2, but that is yet far from becoming a reality.

3. Beast: This pan Indian film from Kollywood is the biggest disaster of the season. Though publicised well with a super hit song in its kitty, the film couldn’t garner any interest at the box office.

Though the openings are impressive in Tamilnadu and a bit in AP, the flop talk made it a disaster on the same day.

Coming to the Hindi circuit, this film faced bitter insults from the poorest of the poor collections.

4. Ghani: The film starring Varun Tej ended up with negative talk. The second week run of the film was completed but performed very badly in almost all the centers.

The film made in a boxing backdrop didn’t gel with the contemporary audience due to the lack of emotional quotient.

This film directed by Kiran Korrapati is a thumbs down but still this is the only film in this position this week.

5. The Kashmir Files: This surprise hit is like a surgical attack on the national box office. Released only in one language, Hindi, it could do wonderful business even in the down South.

The film completed its sixth week run at the theatres and it is the end of its performance. Time has come for this film to hit the OTT platform.

Directed by Vivek Agnihotri, this film was made in the format close to docudrama that made the highest collection on Indian screen.