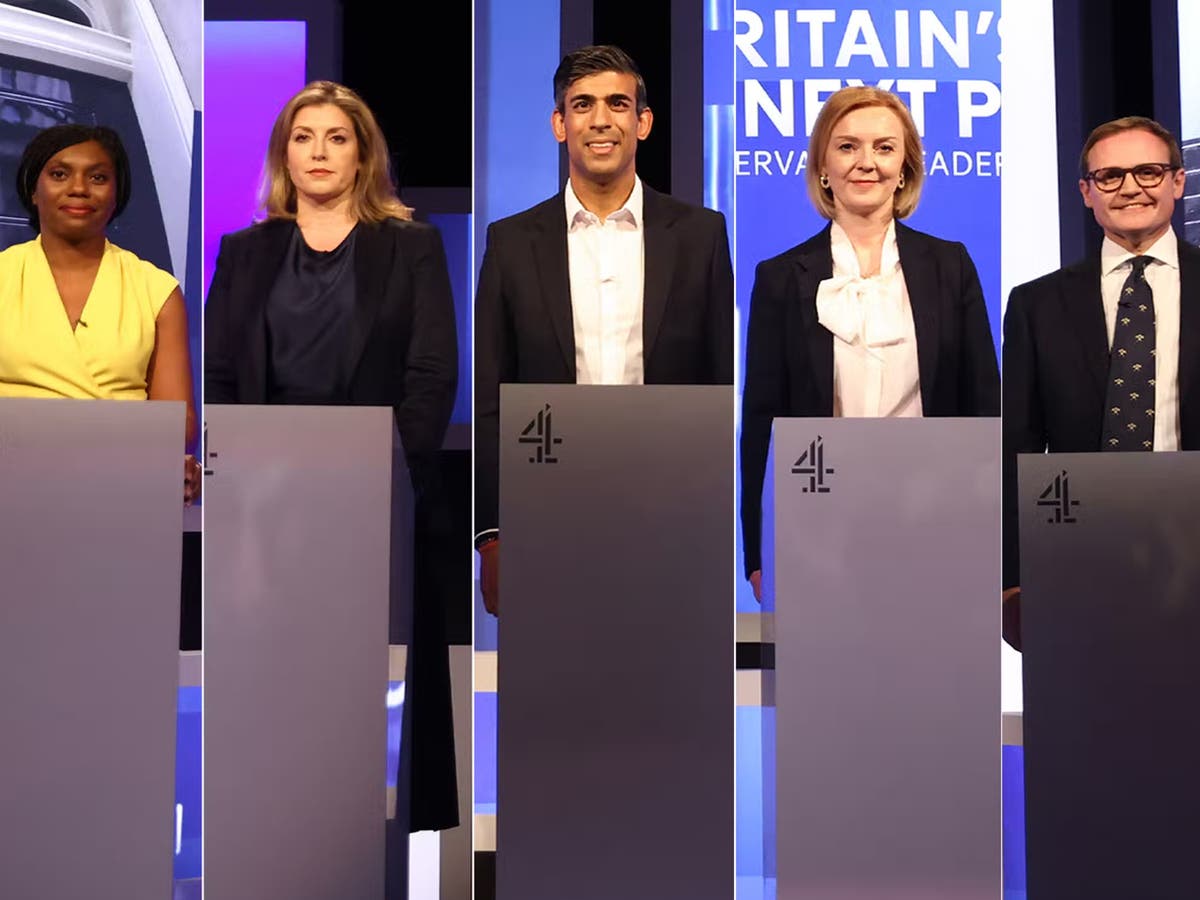 Tory leadership debate – live: Rivals to go head-to-head on ITV as Mordaunt hits out at ‘smears’

Conservative rivals are set to go head-to-head in the second live debate on ITV this evening.

The hour-long debate in the Tory leadership race will take place at ITV’s White City studios, with all five candidates taking part.

The debate comes as Ms Mordaunt today admitted that her plans to cut taxes will lead to increased government borrowing and has hit out at “smears” against her leadership campaign.

She rejected claims she had ever pursued a policy of self-identification for trans people seeking to legally change gender.

Ms Mordaunt also said her proposals to halve VAT on petrol and raise tax thresholds represented a “modest” set of changes to help people struggling with the rising cost of living.

“We need to demonstrate that there is some immediate targeted support going to people. We would have to adjust our tax forecasts but this is absolutely necessary, I think,” she told the BBC’s Sunday Morning programme.

The chairman of the NHS Confederation has urged the Tory leadership candidates to discuss problems facing the NHS and the environmental crisis in the upcoming debate.

Lord Victor Adebowale said he wanted the candidates to “get real” with the public over the problems the NHS is facing.

He told Times Radio: “We have 100,000 vacancies, crumbling buildings, the social care system on its knees and we do need some detail.

“The environmental crisis and the NHS are connected. What I’d like to know (is) what are their practical policies for tackling an NHS which has been starved for resources over 10 years of austerity? That’s why we’re in the situation that we’re in.

“I just think we need to get real. It’s great fun, it’s like watching a horse race, but there are real issues here that need some responses, and unless we do get responses, it’s a question of leadership.

“It’s a question of dealing with the issues in front of us and actually having a vision and some practical solutions that are understood by the public and those people in need of care. So far, we’ve heard nothing.”

Dominic Raab has claimed he wasn’t winking at Angela Rayner during a recent PMQs, instead claiming he aimed the expression at Ian Murray.

The deputy prime minister was criticised by some after the incident, accused of “sexism” toward Labour’s deputy leader.

“I was winking at Ian Murray, who was by Angie Rayner, I’ve got to say, Angie Rayner is great value in all of this,” Mr Raab said.

He went on to explain that he did so after “something was said” about Ms Rayner standing in a leadership contest against Keir Starmer.

Dominic Raab has claimed he wasn’t winking at Angela Rayner during a recent PMQs, instead claiming he aimed the expression at Ian Murray.The deputy prime minister was criticised by some after the incident, accused of “sexism” toward Labour’s deputy leader.“I was winking at Ian Murray, who was by Angie Rayner, I’ve got to say, Angie Rayner is great value in all of this,” Mr Raab said.He went on to explain that he did so after “something was said” about Ms Rayner standing in a leadership contest against Keir Starmer.Click here to sign up for our newsletters.

How can I watch tonight’s debate?

Tonight’s second Tory leadership debate will be televised live on ITV at 7pm.

If you can’t watch it live, you can catch up later on the ITV Hub.

Tom Tugendhat says Rwanda scheme is ‘a totem that is necessary’

Tom Tugendhat says Rwanda scheme is ‘a totem that is necessary’

Is this going to be the Conservative Party’s David Miliband moment? It looks as if the final two candidates will be Rishi Sunak and Penny Mordaunt, with the main uncertainty in the next few days being the battle for third place between Liz Truss and Kemi Badenoch.

Then it will be up to Conservative members to make the final choice. A YouGov poll of members this week suggested that Mordaunt was preferred to Sunak by a large margin, 67 to 28 per cent, and she is consequently the betting favourite, writes John Rentoul.

The Tories are in danger of rejecting their David Miliband: the well-qualified leader tainted by his association with the old regime. Mordaunt is their Ed: the new face appealing to a party that yearns to be liberated from the constraints of reality.

Rishi Sunak is the David Miliband of this leadership contest

Penny Mordaunt has repeated her notorious false claim that the UK was unable to stop Turkey joining the EU – insisting the veto would not have been used.

The Tory leadership contender, who also faces accusations of dishonesty over her stance on trans rights, was accused of ignoring “actual facts” that the EU treaty granted a block on new members.

Confronted with an interview from the 2016 Brexit referendum – when the Leave campaign was seeking to stir up alarm about migrants from Turkey – Ms Mordaunt replied: “The clip says it as I see it.”

Mordaunt hits back at ‘smears’ over transgender views

Tory leadership contender Penny Mordaunt has claimed she is the victim of “smears” following fresh claims about her views on transgender issues.

The international trade minister rejected claims she had ever pursued a policy of self-identification for trans people seeking to legally change gender after press reports appeared to cast doubt on her earlier denials.

In the first televised debate on Friday, Ms Mordaunt clashed with Liz Truss and Kemi Badenoch after they claimed they had been responsible for reversing the policy which she championed as an equalities minister.

Mordaunt hits back at ‘smears’ over transgender views

The 10 economic commitments we need from the next Tory leader

The harsh truth is that whatever their aspirations are, they can only be successful if the economy is successful, writes Hamish McRae.

The harsh truth is that whatever their aspirations are, they can only be successful if the economy is successful, writes Hamish McRae

Truss ‘has not done a single broadcast interview’

The Daily Mail’s deputy editor John Stevens reports that Liz Truss has not done any broadcast interviews during the Tory leadership campaign.

Every other candidate has appeared before some form of broadcast media, with Tom Tugendhat and Penny Mordaunt appearing today on the BBC. Kemi Badenoch and Rishi Sunak have also made themselves available for interview.

Rob Burley, executive editor of Tonight With Andrew Marr, added that he was told the Truss’s team has no plans for any interviews this week either. 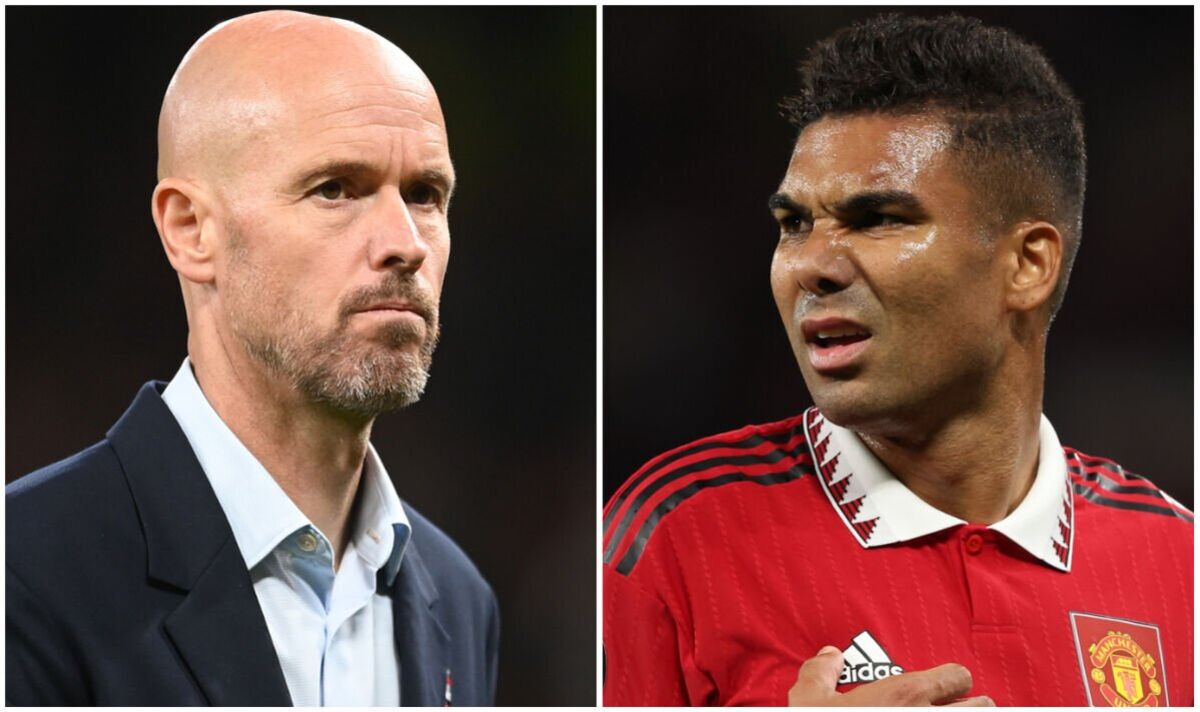 Scott McTominay has impressed during United’s recent good form, having won each of their last four league games, and the{...}

Nadine Dorries has suggested Rishi Sunak was part of a “coup” that brought down Boris Johnson, and said Conservative MPs{...} 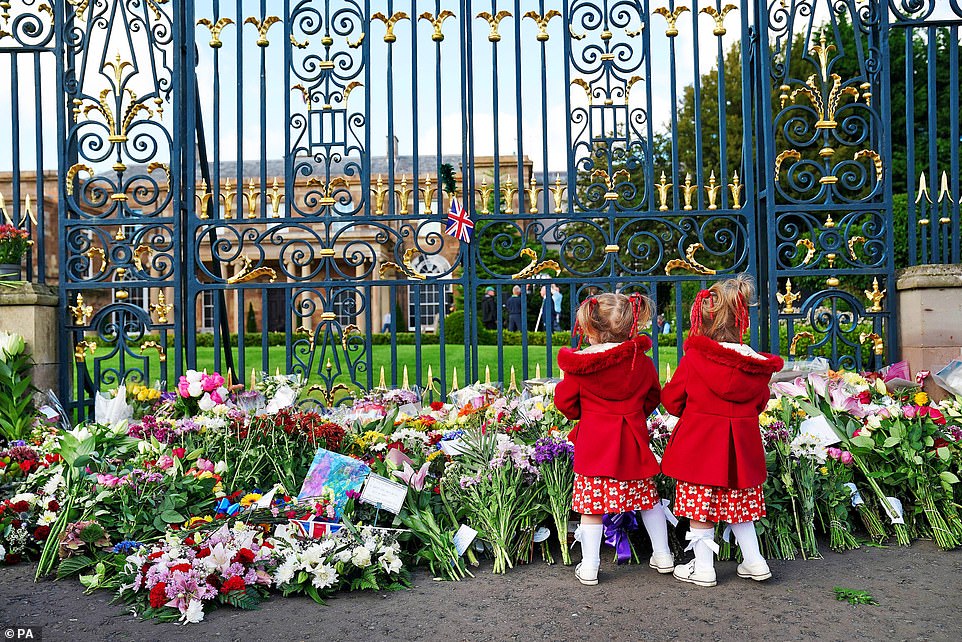 As the nation mourns the death of the Queen, her subjects have left touching tributes across the country. Even the youngest{...}