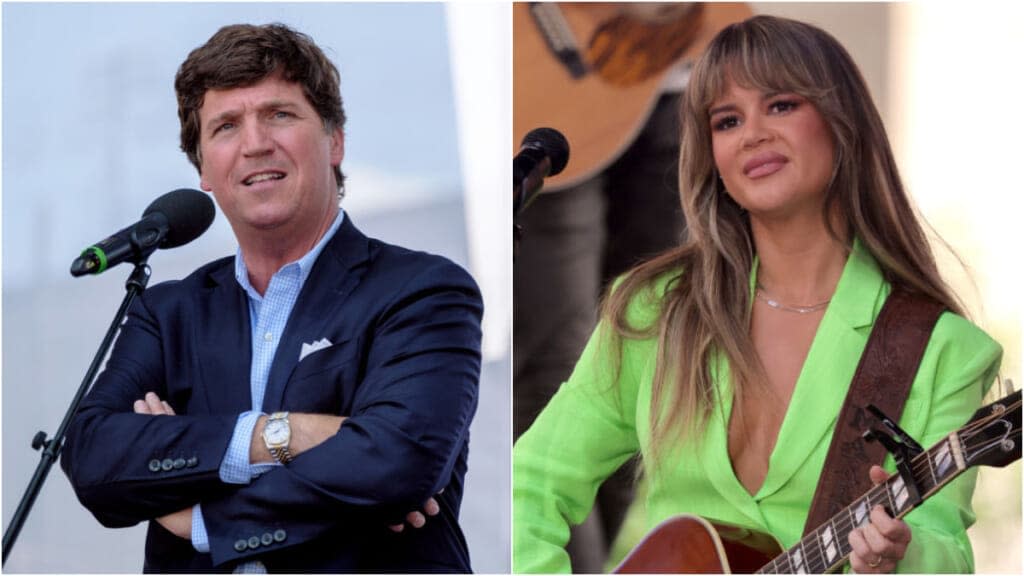 On Friday afternoon, the Grammy-winning singer launched a T-shirt that reads “Maren Morris: Lunatic Country Music Person,” followed by the phone number for the Trans Lifeline hotline. All sales proceeds are to be split between the Trans Lifeline and GLAAD’s Transgender Media Program. Morris announced via Instagram stories that the shirts had raised $63,000 and went on to exceed more than $100,000 in just 15 hours.

Carlson’s insult stems from Morris’ ongoing feud with Brittany Aldean, the wife of country star Jason Aldean. On Aug. 23, Aldean posted a video of herself doing her makeup, accompanied by the caption “I’d really like to thank my parents for not changing my gender when I went through my tomboy phase.”

She added in an Instagram story: “Advocating for the genital mutilation of children under the disguise of love and calling it ‘gender affirming care’ is one of the worst evils. I will always support my children and do what I can to protect their innocence.”

“Lmao!! Im glad they didn’t too, cause you and I wouldn’t have worked out,” her husband responded to the original post.

Morris and country musician Cassadee Pope, among others, hit back against the comments on social media.

“It’s so easy to, like, not be a scumbag human?” Morris wrote on Twitter. “Sell your clip-ins and zip it, Insurrection Barbie.”

In response, Carlson devoted a segment of “Tucker Carlson Tonight” to the matter, calling Morris “some kind of fake country music singer.” The Fox News pundit then hosted Aldean on his show to promote her new “Barbie inspired line” of shirts that say “Don’t Tread On Our Kids.”

According to Aldean’s Instagram post, sales will support Operation Light Shine, a charity that purports to “fight Human Trafficking and Child Sexual Exploitation domestically and abroad.” No sales figures have been released yet.

Following Aldean’s appearance on “Tucker Carlson Tonight,” Morris tweeted a screen grab from the show with the caption, “#NewProfilePic.”

That same day, Jason Aldean’s publicity firm of 17 years announced that it had dropped him.

Like the boot room at Anfield, or the unremarkable Detroit house that became Motown Records’ hit factory, the artist’s studio{...}

1. Taylor Swift’s favorite song lyric of all time is “I had some dreams they were clouds in my coffee”{...}

HBO’s Game of Thrones prequel House of the Dragon spent much of season one setting up the Targaryen war, and{...}