Most Valuable Player contender Zavier Lucero nailed the go-ahead bucket in the last minute to backstop Ricci Rivero’s game-high of 19 points as the Fighting Maroons kept a stranglehold of second spot with an 8-1 card. 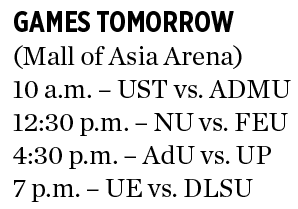 Carl Tamayo (14) and CJ Cansino (12) threw in help, Mr. Lucero had seven while Maodo Diouf added a 7-point, 8-rebound, 3-steal and 3-block line including the game-sealing free throw in the last 29 seconds in UP’s scattered attack.

“We struggled finding our rhythm in the first half. Slowly though, we rediscovered our confidence in time especially in the third quarter bridging to the end, ”said coach Goldwin Monteverde following a week-long rest due to the Holy Week break.

UP on a seven-game win streak – its longest and best season start since winning the UAAP crown in 1986 – bled for just 34 markers in the first half before exploding for 23 in the third that served as its stepping stone in the wild finish.

The Fighting Maroons also scored a tough 83-76 win over the Tamaraws in the first round.

Though Messrs. Lucero and Diouf were able to create separation for UP from a 70-all count, FEU still had two chances to force an overtime but super rookie RJ Abarrientos muffed his attempts including the one at the horn after UP’s Harold Alarcon’s missed free throws to ice it in the last 5.9 seconds.

In the second game, Schonny Winston exploded for 33 points, four rebounds and two steals as La Salle got back on track with a 112-83 coast-to-coast win over Santo Tomas after bowing to Ateneo last week.

Justine Baltazar (17), Evan Nelle (16), Michael Phillips (15) and Kurt Lojera (10) had their shares to make it up for the absence of Joaqui Manuel, who served his one-game suspension after his foul on Ateneo’s Ange Kouame got upgraded to an unsportsmanlike foul.

“We had our best offensive game so far this season. We’re able to execute and run what we’re supposed to run. It took the fight out of UST, ”said coach Derrick Pumaren as La Salle broke free in the third quarter behind Mr. Winston’s 19 markers alone.

Emman Ojuola put up 16 markers and 14 boards in FEU’s sixth loss in nine outings while Paul Manalang’s 13 points went down the drain for the Growling Tigers, who also fell to 3-6.