Liverpool are still on for an unprecedented quadruple – and key man Virgil van Dijk says the whole club is pulling in the same direction to make this a “special” season.

The Reds followed up their qualification for the Champions League semi-finals by reaching their first FA Cup final in a decade on Saturday, beating Premier League title rivals Manchester City 3-2 at Wembley.

They now have the chance to go above City in the league for at least 24 hours when they host Manchester United at Anfield on Tuesday night, live on Sky Sports Premier League.

After claiming the Carabao Cup in February, there has been speculation about the prospect of Jurgen Klopp’s side becoming the first English team to win every competition open to them in a season.

While defender Van Dijk is trying to keep his focus on the next 90 minutes, he tells Sky Sports the big aim is to claim the “rewards” at the end of the season.

“It’s still going to be quite a tough journey until the end of the season in all the competitions we’re still in. Like we always say, we take it game by game and that does not change,” he said.

“Driving players on is winning games and at the start of the season, in any competition you participate in, you try to get as far as possible. It does not always go that way and that’s why it’s never been done in England. The quadruple has never happened.

“Obviously we’re in a good situation, we have a final to play in the FA Cup, we have semi-finals against a very difficult opponent in the Champions League [against Villarreal] and we are second in the league.

“What we feel is we just have to give it a go, play the remaining games of the season with a lot of joy, work hard and give your all and we’ll see where it leads to.

“It’s also been part of our success that we do not get carried away or think what’s in front of the next game. That’s definitely a positive key thing in our success. We keep that going and everything else around what happens, the pressure that builds on us is all from the outside and we should be able to shut that off and I’m definitely doing that. 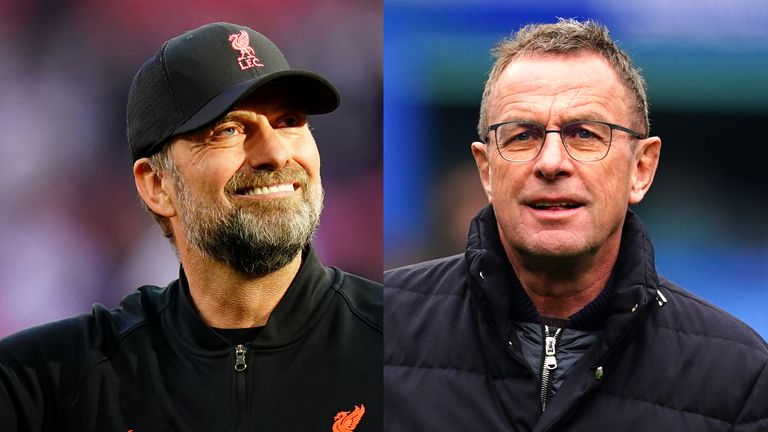 Liverpool manager Jurgen Klopp says he has total respect for Ralf Rangnick ahead of their match against Manchester Utd on Tuesday but says their relationship will not have a bearing on the game.

“It’s been an eventful, outstanding season with everyone being a big part of it in all competitions – younger players, players who do not play as much as they want…. It’s going great. But you want rewards for it. We won rewards so far this season with the League Cup and we’re trying to get rewards at the end of the whole season.

“It’s been so far a very good season for us but we want to make it a special and fantastic one.”

Van Dijk believes Liverpool’s unity has been key to their high level this season, with everyone at the club pulling together to try to bring more silverware to Anfield.

“Over the last couple of years, we’ve won quite good trophies but that feeling we want to repeat and keep going,” said Van Dijk, who has won a Premier League, Champions League, Club World Cup and European Super Cup with Liverpool , as well as this season’s Carabao Cup.

“We work hard for this. With only working hard you have no guarantee that you get trophies. But we are in a good way, we have the quality throughout the whole squad, we’re in a very good situation, the club in general has been a very good place to be, with the club above and the fans, but also the squad – everyone is one and looking in the right direction and that is key to success as well. “

After Manchester United on Tuesday, Liverpool play Everton at Anfield on Sunday and then face Villarreal in the first leg of their Champions League semi-final on Wednesday.

“I do not want to be in a position at this stage of the season that I’m playing for nothing,” smiled Van Dijk.

“Every game is a big game. For us, Tuesday is a massive game against Man Utd then at the weekend we have Everton and then the Champions League. These games you want to play, you want to perform, you want to win and be on the success side of the story.

“I came here to play to win trophies, to develop myself and get the best out of myself and to obviously be part of this amazing club. I’ve no regrets about my decision, of course!”

FREE TO WATCH: Highlights from Liverpool’s win against Manchester United in the Premier League.

United will arrive at Anfield motivated not only to deliver a blow on their rivals and boost their own top-four hopes but also exactly some measure of revenge for the 5-0 humbling Liverpool gave them at Old Trafford in October.

Van Dijk admits he was surprised how “easy and simple” that match turned out to be but is expecting a stiffer test on Tuesday.

“These types of games are games on their own,” he said. “You could have such good form for many games winning and the other team maybe not but it’s a game on its own and anything can happen.

“Obviously we are preparing very well for a very good team. They have individual quality that’s outstanding all over the pitch. So we have to be ready. It’s going to be tough but we should be confident, ready for tough moments – like they always happen in games – and hopefully get the three points.

“The games that we played over there were always going to be tough but to come away with 5-0 quite easy and simple was not what we all expected before the game but that does not mean we did not enjoy it as much as we should.But that game is out of the way.

“They made changes after that game so they’re in a different mental state at the moment. They’re trying to get top four, build towards next season a little bit and we’re trying to focus on ourselves and win the game and doing everything possible to do it.

“I think they’ll be going for it, like I would as well. I expect a very good game but a game I want to play. If you play against very good players you have to be ready and hopefully we can show our quality throughout the whole game and win the game. “

Liverpool manager Klopp has a decision to make over which center-back to pair with Van Dijk for the visit of Manchester United.

Ibrahima Konate has scored the opening goal in his last three matches, including in their Wembley FA Cup semi-final win over Manchester City at the weekend when Joel Matip, preferred for the league game against their title rivals, was rested.

Forwards Diogo Jota and Roberto Firmino could come into the team having been introduced as late substitutes at the weekend.

It was announced on Tuesday morning that Cristiano Ronaldo would not feature at Anfield for Manchester United after the death of his baby son.

Raphael Varane did not train with the group on Monday but Bruno Fernandes was able to despite being involved in a car accident that morning.