Every week we wrap up the must-reads from our coverage of the Ukraine war, from news and features to analysis, visual guides and opinion.

The week started with the sound of explosions heard around the Ukrainian capital in the small hours of Sunday morning.

It was the first time anywhere in the capital has been hit for more than five weeks. One person was hospitalised, and a plume of smoke rose and was visible from high points in the city. Five cruise missiles were launched from Tu-95 bombers, one of which was intercepted, Ukraine’s air force said, in an attack that represented a change of approach from Russian forces.

Luke Harding and Dan Sabbagh spoke to Ukraine’s former prime minister Yulia Tymoshenko, who described Russian president Vladimir Putin as “absolutely rational, cold, cruel, black evil” and claimed he is determined to go down in Russian history alongside Stalin and Peter the Great.

In an exclusive interview in Kyiv, Tymoshenko dismissed the suggestion that Putin was “crazy”. “He acts according to his own dark logic,” she said. “He’s driven by this idea of historic mission and wants to create an empire. That’s his hyper-goal. It comes from a deep inner desire and belief.”

Tymoshenko, a leader of the 2004 Orange revolution and twice prime minister, had several one-on-one meetings with the Russian president. They held negotiations in 2009 after Putin, then prime minister, turned off the gas supply to Ukraine. Tymoshenko stood for president in 2010, 2014 and 2019, finishing second twice and then third.

Close up, Putin was “always cautious” in what he said and always suspicious that he might be being taped, she said. “He is from a KGB school,” she said. Before Russia’s full-scale invasion in February, he made no secret of his belief that there was “no such nation as Ukraine, and no such people as Ukrainians”, she said.

Ukraine ‘almost out of ammunition’

Ukraine’s deputy head of military intelligence has told Isobel Koshiw that Ukraine is losing against Russia on the frontlines and is now almost solely reliant on weapons from the west to keep Russia at bay.

“This is an artillery war now,” said Vadym Skibitsky, deputy head of Ukraine’s military intelligence. The frontlines were now where the future would be decided, he told the Guardian, “and we are losing in terms of artillery”.

“Everything now depends on what [the west] gives us,” Skibitsky said. “Ukraine has one artillery piece to 10 to 15 Russian artillery pieces. Our western partners have given us about 10% of what they have.”

Ukraine is using 5,000 to 6,000 artillery rounds a day, according to Skibitsky. “We have almost used up all of our [artillery] ammunition and are now using 155-calibre Nato standard shells,” he said of the ammunition that is fired from artillery pieces.

Life in Donbas as the frontline creeps closer

Luke Harding and Isobel Koshiw reported on the deteriorating conditions for those living in Donbas as Moscow continued to concentrate its firepower on Ukraine’s east.

In the city of Slavyanask, a one-time spa resort near Sievierodonetsk, a terrible battle draws near.

Sitting on a bench outside city hall, the deputy mayor, Yuriy Pidlisnyi, said he told residents to flee. About 25,000 people out of its population of about 100,000 had stubbornly ignored his advice, he said, as conditions inside the city get steadily worse.

There is no gas or water, and only intermittent electricity. With petrol expensive, many residents get around on bikes. Some who left have come back after running out of money. The local economy is trashed. Soldiers queue outside a market cafe to buy cost-price 60 Hryvnia (£1.80/$2.25) kebabs.

Slava Vladimirovich, a member of Ukraine’s Donbas battalion who has been evacuating civilians from the beleaguered city of Lysychansk, asked: “Why did God punish me by making me be born here? I liberated Popasna and Lysychansk eight years ago and took part in the biggest battles. And then the Russians came back to us again.”

Isobel and Luke also spoke to troops in Bakhmut who described their perilous fight to hold Ukraine’s east.

Soldiers said they had become used to remorseless shelling from the Russian side. “The first time you see a tank you are afraid,” said Sasha, a young medic. “After a time you don’t feel it. It’s like going into a trance. Your objective is to kill the enemy. You can’t do this if you have a normal psyche. You become other. My parents tell me I’m disconnected from reality.”

Dan Sabbagh’s analysis of the Donbas battle noted there are signs that the invaders are reaching exhaustion and questioned whether Ukraine can cope with the losses it is sustaining.

Battle for control of Sievierodonetsk

Heavy fighting has seen Russian forces concentrate their efforts on trying to surround and capture the eastern city of Sievierodonetsk, advancing at a rate of 500m to 1km a day, Dan Sabbagh reports.

“Sievierodonetsk remains the epicentre of the confrontation in Donbas,” Zelenskiy said in a late-night address to the nation on Wednesday evening, claiming that Ukraine had inflicted “significant losses on the enemy”.

The Ukrainian leader corroborated reports of heavy fighting, saying the battle for Sievierodonetsk was “probably one of the most difficult during this war”.

“In particular, the fate of Donbas is being decided there,” he added.

Capturing Sievierodonetsk would give Russian president Vladimir Putin control of all of Luhansk – the region that, with Donetsk, makes up Ukraine’s Donbas industrial heartland – consolidating a shift in battlefield momentum after his forces were pushed back from Kyiv and northern Ukraine.

Highlighting the importance of the fight for Sievierodonetsk, Zelenskiy on Sunday visited the beleaguered city of Lysychansk, just a few kilometres south.

On the frontline close to the fiercest fighting, he spoke to his troops. “What you all deserve is victory – that is the most important thing. But not at any cost,” he said in a video later broadcast from his visit.

Death sentences at a show trial

Andrew Roth and Emine Sinmaz reported on the “disgusting Soviet-era show trial” that resulted in death sentences for two British men and a Moroccan national captured while fighting in the Ukrainian army in Mariupol.

On Thursday a court in Russian-controlled east Ukraine convicted 28-year-old Aiden Aslin, from Newark, 48-year-old Shaun Pinner, from Watford, and Saaudun Brahim on charges of “terrorism”. Observers said the process was intended to imitate the war crimes trials of Russian soldiers taking place in Kyiv.

Both Britons have said they were serving in the Ukrainian marines, making them active-duty soldiers who should be protected by the Geneva conventions on prisoners of war. However, Russian state media has portrayed them as mercenaries, and the court convicted them on the charge of “being a mercenary”.

The ruling was swiftly condemned by top British officials.

“I utterly condemn the sentencing of Aiden Aslin and Shaun Pinner held by Russian proxies in eastern Ukraine,” said the UK foreign secretary, Liz Truss. “They are prisoners of war. This is a sham judgment with absolutely no legitimacy … my thoughts are with the families. We continue to do everything we can to support them.” 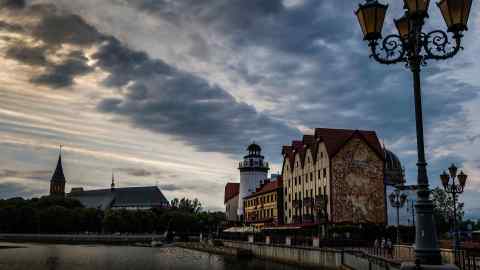