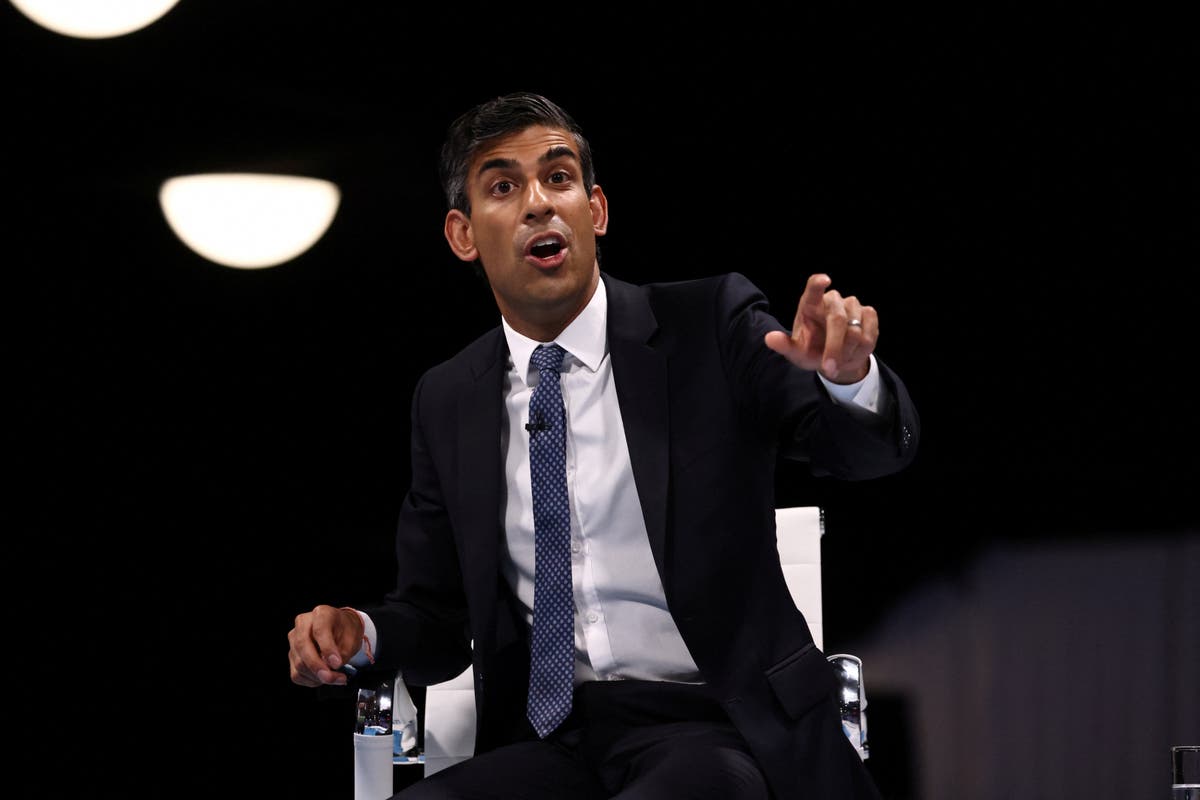 ‘You stabbed Johnson in the back’: Rishi Sunak accused of betrayal at first Tory leadership hustings

Rishi Sunak faced accusations he “stabbed Boris Johnson in the back” as he addressed grassroots Conservatives in the first member hustings in the race to replace the prime minister.

There was applause from the crowd of more than 1,000 Tories at the suggestion Mr Johnson should be on the ballot paper alongside his former chancellor and his rival Liz Truss.

But Mr Sunak denied he had betrayed the PM while being grilled at the event in Leeds. Rather, he said he resigned because of differences in economic policy.

But taking inspiration from the surroundings – next door to Elland Road, the home of Leeds United Football Club – Ms Truss also named another divisive 1970s figure as a guiding light: she said she would govern “in the spirit of Don Revie”.

The late former Leeds and England manager was famed for his hard-nosed win-at-all-costs approach to the game and once said “you get nowt for coming second”.

In perhaps the most dramatic moment of the two-hour hustings, Mr Sunak was confronted by a Tory named Matthew, from West Yorkshire, who told him: “You’re a good salesman and you have many strong attributes, but many people continue to support Boris Johnson who has delivered consistently through treacherous waters.

“Many people unfortunately see that you’ve stabbed him in the back. He is the man who made you as a senior politician. And some people don’t want to see that in No 10.”

Mr Sunak responded by saying that it had become clear – while trying to a joint speech with his then boss – that there was “a significant difference of opinion” between the pair on the economic direction of the country.

“There is no way that the prime minister and chancellor cannot be joined at the hip with regard to economic policy, particularly at a time when the economy faces real challenges,” he said. “So I was left with no choice.”

He insisted he was “well placed to bring the party back together, because I’ve already drawn support from across the party”.

Both contenders made great play of their local links. Mr Sunak said becoming the MP for Richmond, in North Yorkshire, in 2015 had been “the greatest honour of my life”, while Ms Truss riffed on her Leeds adolescence saying she remembered buying her first record – Whitney Houston – in the city.

In an apparent nod to the controversy sparked earlier in the contest when she appeared to denigrate her old Roundhay School, she joked: “I hope there are no teachers of mine in the audience. And if there are, I’m really, really sorry.”

But she later doubled down on the claim that pupils there had been let down. “I’m not claiming it was a sink school,” she said. “It was an average comprehensive at the time. What I’m saying is at that the average comprehensive, under the auspices of Leeds City Council, there were too many kids who were able to leave school without the education that they needed. The teaching was patchy … so there were kids who fell through the cracks.”

In a seeming bid to draw a contrast with her well-heeled and smoothly-groomed rival, Ms Truss boasted of her “grit, determination and straight-talking” and added: “That, my friends, is what I think we need now in Downing Street.”

She received particular applause for promising to build Northern Powerhouse Rail – a line that would link Leeds, Bradford and Manchester – and acknowledging the fact that Leeds is the biggest city in western Europe without an urban transit system.

In a surprise admission, she said the government had been wrong to close schools during the Covid-19 pandemic. “I think it has caused a great deal of damage to children,” she noted.

For his part, Mr Sunak called for reforms of the school systems and focus on “educational excellence” by bringing back grammar schools if elected.

“It’s not about throwing more money at the problem, it’s about reforming the system to get better outcomes. And that’s what I would do with education as well,” he said.

And he took one of his hardest swipes yet at Ms Truss’s plans for £30bn in immediate tax cuts, which he regards as inflationary.

While she says the plans are fully costed, he described them as a “spree – borrowing tens and tens of billions of pounds for unfunded promises”.

And he added: “I am going to fight hard for the argument that we should not mortgage our children’s and our grandchildren’s futures to make our lives easier today.”

Asked about illegal immigration, he suggested trade with some countries should be dependent on them agreeing to take back asylum seekers who the UK had rejected.

He said he would pursue the current plan to send failed asylum seekers to Rwanda.

Mr Sunak also defended wearing expensive outfits while on the campaign trail, saying: “It’s not about the shoes I’m wearing or the suit I’m wearing, it’s about what I can do for this country.”

Reaction after the event appeared mixed.

Amanda Carter, a councillor on Leeds City Council, said she felt Mr Sunak had edged it. “Nothing ruffles Rishi,” she said. “He can operate under pressure and, in a cost of living crisis, that’s just what we need.”

But Elena Rose Bunbury – a Leeds-based member of the Young Conservatives – said that, while she remained unsure who would have her vote, she had been impressed by Ms Truss’s composure. “She was very personable, very reactive, she responded well to the audience,” she said. 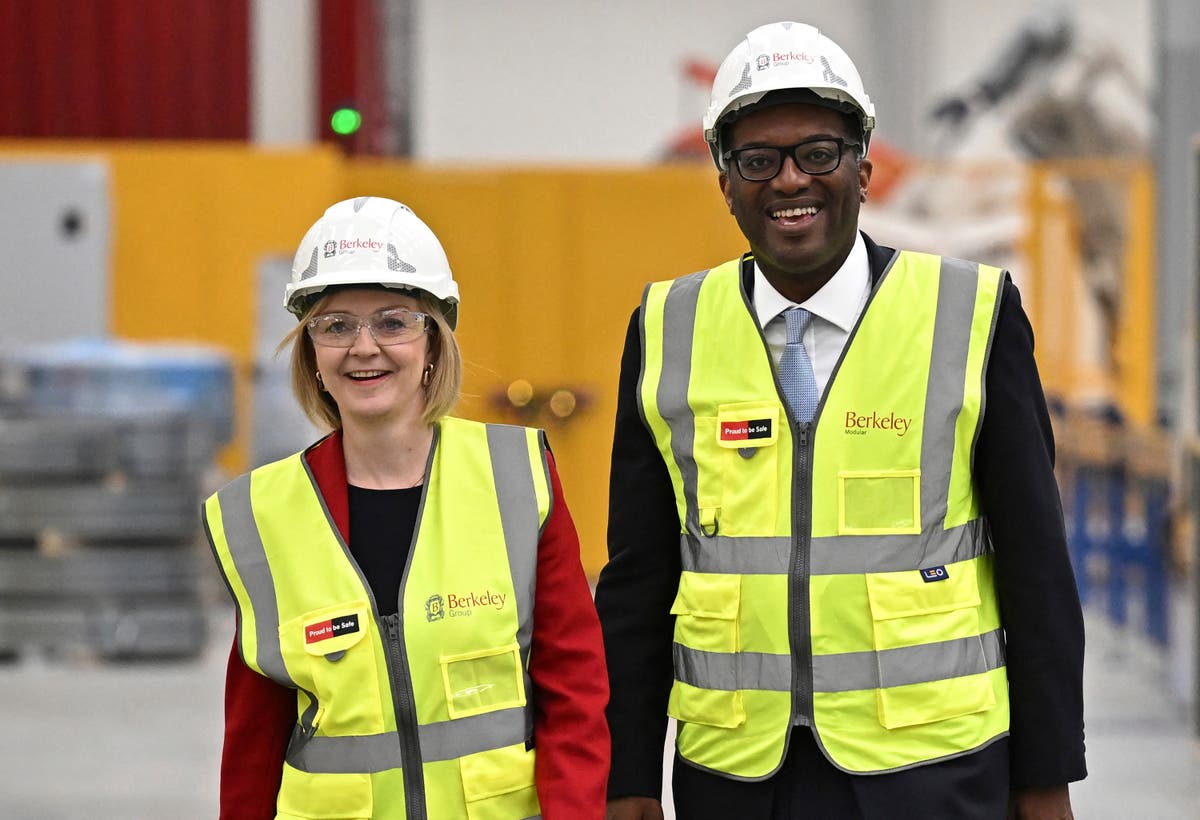 Manchester United made enquiries for Dan Ashworth before he became the director of football at Newcastle United, according to The{...}